Burns Night – what’s it all about?

2014 was a big year for Scotland, with the vote on independence resulting in the UK staying together as one, and their political structure getting something of a revamp.  We feel that Burns Night may have even more significance in 2015, due to the recent wave of hardcore patriotism sweeping Scotland, and the fact that the English seem to be embracing all things Scot after our sigh of relief for them staying in our team.  Burns Night celebrates the life and poetry of Scotland’s national bard, Robert Burns, on 25 January each year – and it’s a really, really good excuse to eat loads of haggis, neeps and tatties…and drink a LOT of beer.  If you’re still a little hazy on the details, we at Function Fixers have provided all the information you need to really get in the swing and spirit of Burns Night, as well as understanding the details of the traditional celebrations. 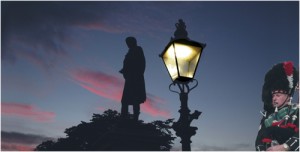 Who was Robert Burns?

Robert Burns (aka Robbie Burns, Scotland’s Favourite Son) was a poet, lyricist, and working class hero.  Born into a life of tough rural poverty, he used what little educational opportunities available to him to develop as a prolific poet.  Writing about the everyday struggles, realities, loves and loathes of everyday Scottish citizens, Burns used traditional Scottish dialect that was difficult for anybody from outside the country to understand.   It did, however, touch the tongues and heartstrings of the entire nation, and his untimely death at the age of just 37 really highlighted the plight of his people, making his work all the more poignant and important.  Auld Lang Syne, his most famous poem, is still sung on New Years Eve in most English speaking countries around the world today – which makes one wonder how many people actually understand what the words mean…

Burns remains the National Poet of Scotland to this day, as Scottish literature is recognised to have ‘died with Burns’ in 1796.  After that year, poetry was written almost exclusively in English. 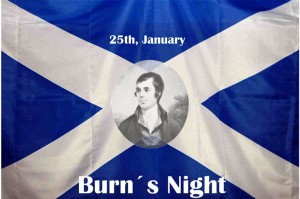 Why is Burns Night held on 25th January?

Burns Night takes place on the poet’s birthday.  He was born into a humble two-roomed cottage in Alloway, on 25th January 1759.

What do the celebrations involve?

You eat food and drink beer, basically – what else would you expect from a UK celebration?! The ceremonial entrance of the haggis is perhaps the most important moment of the evening, and if you’re really going all-out, you’ll have your bagpipes at the ready to welcome this traditional dish onto the table.  Then, the host reads Burns’ poem entitled ‘Address to a Haggis’, before cutting it in two and serving it up to their guests.  Neeps and tatties (that’s swede and spuds to you and me, in celebration of the farmer’s diet that Burns will have survived on throughout his life) are served mashed and lathered in butter. For drinks, the general consensus seems to be that the bigger the glass, the better the whiskey.

There are lots of Burns Night dinners taking place throughout the UK, and it’s well worth Googling the events in your local area.  It’s always a great laugh (kilts, pipes and alcohol…what could go wrong?) and the food is fantastic – but overall, we’re counting it as a major celebration in 2015, simply because Scotland is still by our side.  We’ll be donning every bit of tartan in our wardrobe!

If you’d like to book a private space in a restaurant, bar or club for Burns Night, or perhaps want to find a last-minute hotel deal in Scotland to celebrate, you can call Function Fixers to find amazing bargains in your area.  Remember, our service is free!